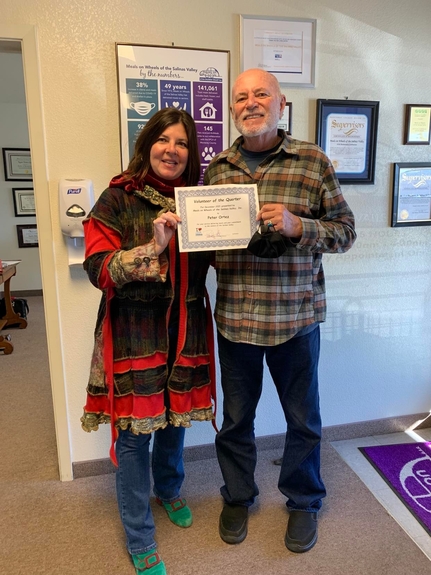 Congratulations, Peter Ortez, our Volunteer of the Quarter, December 2021, shown with Regina Gage, MOWSV Executive Director. A  volunteer since May 2020 (and in the midst of the COVID-19 pandemic) Peter was retired and wanted to give back to society. He said that "there is only so much TV you can watch!" Peter commented that during his youth he took a lot out of society and volunteering now makes him feel good on the inside, a way to pay back what he took out.

Peter's favorite part of being a volunteer with Meals on Wheels is how good it is to see the smiles on his client's faces when he drives up with their meals. "Some of the people are very grateful for the service." Peter stated.  "If you want to feel good about yourself and do something very worthwhile, Meals on Wheels is a great place to be involved with."

Living in San Juan Bautista since 1986, Peter says that he visited the small town and fell in love with the area. He doesn't mind the drive from San Juan Bautista to Salinas to deliver meals to those seniors who need them. To expand his network and connections after retiring, and to stay active (besides watching tv and gardening) Peter looked for organizations that would help him give back to the community. Not only does he volunteer at the Monterey Bay Aquarium two Saturdays a month, he also volunteers within the California Prison System. Aside from his multiple volunteer commitments, Peter likes to work out at the gym and hike in the Mt. Madonna area 2-3 times a week. It's important for Peter to stay in shape by being active every day. His hobbies include fishing, both river and ocean – as he enjoys the solitude. He’s a world traveller -  all over Central America and Mexico and is currently in to Uruguay for a few weeks at the first of this year. He would like to have a dog but states that he "travels too much!" Peter has 4 daughters; 1 lives in Beverly Hills; 2 in Fresno; 1 in Visalia and between them Peter has 8 grandkids.

Meals on Wheels of the Salinas Valley is so fortunate that Peter chose our organization to become a volunteer with. Congratulations on being named Volunteer of the Quarter!